Are you disappointed with your current endpoint monitoring solution?

It's Ben from ChatFortress. I'm so confident you'll love our 24/7 Next-Generation Endpoint Monitoring that I want to give you access to our entire platform with 24/7 SOC Analysts Automated Response for 30 days free.

Incident response is a structured process used by organizations to detect and respond to cybersecurity incidents. The National Institute of Standards and Technology is an agency operated by the USA Department of Commerce, that sets standards and recommendations for many technology areas.

Read on to see the four steps of NIST incident response, such as preparation, detection and analysis, and containment, eradication, and recovery.

What is Incident Response?

Incident response is a structured process organizations use to identify and deal with cybersecurity incidents. Response includes several stages, including preparation for incidents, detection and analysis of a security incident, containment, eradication, and full recovery, and post-incident analysis and learning.

The National Institute of Standards and Technology is an agency operated by the USA Department of Commerce, that provides standards and recommendations for many technology sectors.

Within NIST, the Information Technology Laboratory (ITL) is responsible for developing standards and measurement methods for IT, including information security. ITL developed an influential model for incident response, the Computer Security Incident Handling Guide (Special Publication 800-61). In this article we’ll cover the basics of the NIST incident response recommendations and how you can leverage them for your organization.

The NIST Computer Security Incident Handling Guide provides in-depth guidelines on how to build an incident response capability within an organization. It covers several models for incident response teams, how to select the best model, and best practices for operating the team.

Within each of these models, staff can be employees, partially outsourced, or fully outsourced. Employees can also be full- or part-time.

How to Organize Incident Response 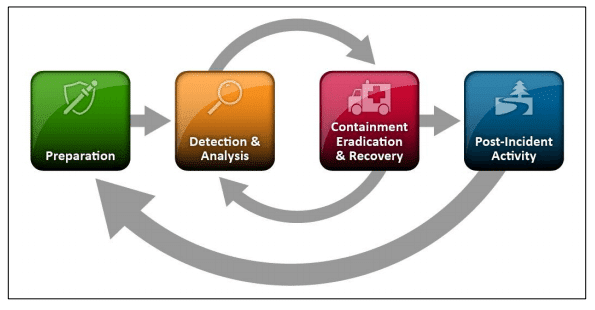 After every incident there is a substantial effort to document and investigate what happened during the incident, to feed back to earlier stages and to enable better preparation, detection and analysis for future incidents.

There is also a feedback loop from the containment and eradication step to detection and analysis—many parts of an attack are not fully understood at the detection stage and are only revealed when incident responders “enter the scene”. These lessons can help the team detect and analyze attacks more fully the next time around.

To prepare for incidents, compile a list of IT assets such as networks, servers and endpoints, identifying their importance and which ones are critical or hold sensitive data. Set up monitoring so you have a baseline of normal activity. Determine which types of security events should be investigated, and create detailed response steps for common types of incidents.

Detection involves collecting data from IT systems, security tools, publicly available information and people inside and outside the organization, and identifying precursors (signs that an incident may happen in the future) and indicators (data showing that an attack has happened or is happening now).

Analysis involves identifying a baseline or normal activity for the affected systems, correlating related events and seeing if and how they deviate from normal behavior.

An integrated security platform like Cynet 360 can do this for you, automatically identifying behavioral baselines, detecting anomalies that represent suspicious behavior, and collecting all relevant data across networks, endpoints and users to help you investigate it.

The goal of containment is to stop the attack before it overwhelms resources or causes damage. Your containment strategy will depend on the level of damage the incident can cause, the need to keep critical services available to employees and customers, and the duration of the solution—a temporary solution for a few hours, days or weeks, or a permanent solution.

As part of containment, it is important to identify the attacking host and validate its IP address. This allows you to block communication from the attacker and also identify the threat actor, to understand their mode of operation, search for and block other communication channels they may be using.

In the eradication and recovery stage, after the incident has been successfully contained, you should act to remove all elements of the incident from the environment. This might include identifying all affected hosts, removing malware, and closing or resetting passwords for breached user accounts.

Finally, once the threat is eradicated, restore systems and recover normal operations as quickly as possible, taking steps to ensure the same assets are not attacked again.

A central part of the NIST incident response methodology is learning from previous incidents to improve the process.

You should ask, investigate and document the answers to the following questions:

Cynet can deploy the Cynet security platform in just minutes across hundreds to thousands of endpoints. They can scan, identify, analyze and attend to threats before any harm is done. The Cynet incident response team can assist with:

“One of the biggest values of ThreatFortress is their CyOps team of security experts they are available around the clock, whenever we need them. They enhance and complement our existing security capabilities and as a CISO, this gives me peace of mind.”

We know sometimes you just want to talk to a human. That's ok you can contact your ChatFortress Specialist using

Webinar exposes the one email that hackers send to steal your identity and steal your data!

This site is not a part of the FACEBOOK™ website or FACEBOOK™ INC. Additionally, this site is not endorsed by FACEBOOK™ in any way. FACEBOOK™ is a trademark of FACEBOOK™, INC. This landing page makes use of Smart Pixel and Geolocation tracking technologies to remarket and retarget to you online and offline. By submitting this form and or interacting with this page via a response to a conversation, you agree to being called at the telephone number you've provided, to receiving marketing-related, electronic communications and or physical communications via direct mail from our company or associated companies, partners or affiliates, and to our Data Policy. You may withdraw your consent to the calls or unsubscribe from such emails at any time. ChatFortress™ is a registered trademark of ChatFortress LLC. All Rights Reserved. Billing by ChatFortress LLC.