User identities are a major target for attackers since they are the key to resources throughout the organization. Determined attackers might evade detection, succeed in stealing user account credentials and leverage them for lateral movement and data access.

Advanced attackers study their target environment carefully, as well as the protection measures in place and learn their weaknesses until finding a way to evade detection. No protection is 100% proof and combination of persistency, skill and determination can eventually outrun the best detection. 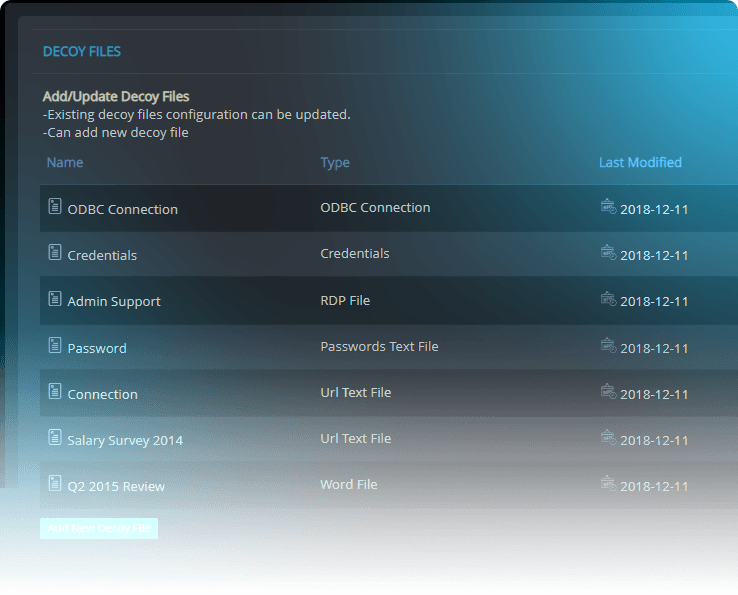 Passwords are extremely valuable to attackers attempting to expand their foothold within a compromised environment. Cynet crafts and plants text files containing false passwords along attackers’ potential routes. Any attempt to log in with these passwords triggers an alert.

The attacker’s top object is to get hold of sensitive data – IP, PII, business plans, etc. Cynet crafts and plants decoy data files and links – similar to what attackers would seek in the target organization – and plants them across endpoints and servers in the environment.

When an attacker opens a decoy data file at its premise, an alert is triggered and the file sends Cynet the malicious IP address at which it resides.

Review the demo of the Cynet 360 platform and how it can help protect your business.Watch Demo

Experienced a breach and need live response? Please use the live chat or Call: +1-307-999-7755 or Email: Help@ChatFortress.com

“One of the biggest values of ThreatFortress is their CyOps team of security experts they are available around the clock, whenever we need them. They enhance and complement our existing security capabilities and as a CISO, this gives me peace of mind.”

Complete coverage of all attack vectors that involve endpoint, user and network.

Cynet Prevention & Detection leverages Cynet Sensor Fusion to provide the integrated capabilities of Next-Generation Antivirus, Endpoint Detection and Response, Network Analytics, Deception and User Behavioral Analytics. Cynet also moves beyond the incremental value of these capabilities, by unveiling advanced threats that can be detected only by concurrent analysis of endpoint, user and network activities.

Profile the behavior of all user accounts to pinpoint anomalies that indicate an attempted compromise.

Plant various types of decoy files across your environment to lure attackers into revealing their presence. Learn More

Full automation of response workflows across the entire environment.

Cynet Response Orchestration includes a full set of remediation actions to address infected hosts, malicious files, attacker-controlled network traffic and compromised user accounts. Remediation can be performed either directly on the endpoint or by involving infrastructure components such as firewall, AD, etc. Cynet supports response automation by gathering several remediation actions into playbooks that are activated upon occurrence of respective alerts.

Build your own response workflows by chaining various remediations together and adding scripts to communicate with core components such as firewalls and AD.

Providing you with 24/7 monitoring of all of your endpoints by real humans and SOC Anlysts. CyOps is Cynet’s 24/7 SOC team of threat researchers and security analysts that complement Cynet 360 technology with unmatched security expertise, available to Cynet’s customers at no additional charge. CyOps assist Cynet customers with in-depth investigation, proactive threat hunting, malware analysis and attack reports, ensuring that every security event is handled and resolved.

Continuous search through our customers’ environment to detect and address live attacks.

Engage CyOps upon any suspicious activity you see in your environment, to detect, respond and remediate.

Get reports on attacks that CyOps detects across our customers’ install-base, including IOC and mitigation practices.

Submit any suspicious file to an expert analysis for information regarding its nature and potential risks.

We know sometimes you just want to talk to a human. That's ok you can contact your ChatFortress Specialist using

Webinar exposes the one email that hackers send to steal your identity and steal your data!

This site is not a part of the FACEBOOK™ website or FACEBOOK™ INC. Additionally, this site is not endorsed by FACEBOOK™ in any way. FACEBOOK™ is a trademark of FACEBOOK™, INC. This landing page makes use of Smart Pixel and Geolocation tracking technologies to remarket and retarget to you online and offline. By submitting this form and or interacting with this page via a response to a conversation, you agree to being called at the telephone number you've provided, to receiving marketing-related, electronic communications and or physical communications via direct mail from our company or associated companies, partners or affiliates, and to our Data Policy. You may withdraw your consent to the calls or unsubscribe from such emails at any time. ChatFortress™ is a registered trademark of ChatFortress LLC. All Rights Reserved. Billing by ChatFortress LLC.